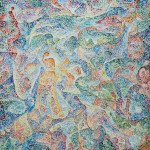 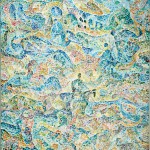 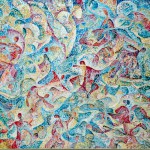 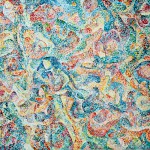 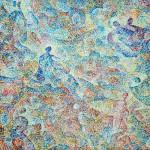 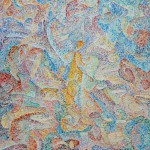 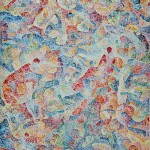 In counterpoint to Symétries, where the lines describe a perfectly balanced architecture, the Récits Fabuleux are constructed with random lines which cover the surface of the canvas. These lines are not drawn but created beforehand with a linen filament that is stuck to a thin sheet of paper, then assembled to create an impression of continuity, to form a supple succession of curved lines.

This raised design follows the meanders and the natural tensions of the filament. It represents nothing. It obeys the fluidity, the movement and the entanglement of the curves, their occupation of space. It is matter purified, where actions follow actions and elements converse in a fundamental mobility that lends itself wonderfully to the appearance of a baroque, even whimsical space.

The filaments materialise a sort of energy current to which the colours add their own luminous energy. In this play of density and intensity, the painting becomes a dynamic stage where, in passing, evocations of a distant world come into being, a world of heroes and legends, tales wherein ideals and virtuous impulses are to be found. These ‘virtues’ appear incarnate in the colours themselves.

The organisation of these turbulent universes is founded on the hierarchy of colours and the arrangement of volumes. All that counts is the circulation of subtle forces within the painting and their repercussions on our mental and psychological universe.